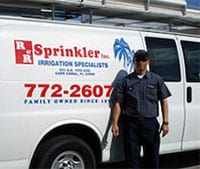 Back To Previous Page

Mike St. Pierre has repaired sprinklers his whole life. He was on the job sites with his Dad, (Rene Jr.) and Grandfather (Rene Sr.) by the time he could walk. He completed his first official service call at the age of 13. He has a degree in criminology but felt the call to enter the family business in the mid 1990’shortly after he graduated.

His expertise, hands down, is trouble shooting problems with irrigation systems. Many of his colleagues and friendly competitors often call him when they can’t figure something out. His goal is to maintain and grow his customer base with folks that will call him year after year not because they HAVE to but because they WANT to.

He has customers that have known him since he was born! There aren’t many owners that can say that!

Please let me know if I can help you with any project:

with a FREE quote from our experts